Once upon a time, in a galaxy far, far away...I thought I was normal. Then one day I heard Darth Vader. Seriously.

I am a huge Star Wars fan (at least of Episodes IV and V - not the new crap), so you might think this was a dream come true. But when you look around and James Earl Jones is not there (I think he was busy with his gig on CNN or making Field of Dreams or something), it's a bit unsettling.

Darth never told me anything bad at first, but I was worried. As I said, I am a fan of episodes IV and V - the ones where he is evil, and unredeemed by the act of saving Luke Skywalker. So I was on guard. He would say things like, "This seems like a good day for a walk," Or, "Go ahead, order the cheesecake. You look fabulous and could afford to put on a few pounds." Things he probably said on his off days while ruling the Imperial Forces.

Then the comments started to get negative. (He is a Sith Lord, after all). Remember the scene where he berates a commander for not building the Death Star quickly enough? (He should have checked the plans for that exhaust port the size of a womp rat, too). And also the scene where he chokes that annoying guy just by gesturing with his hand? I was ten when I first saw that (newly released, I might add - sort of like saying I was at Woodstock), and I went around secretly trying to choke strangers by making a crab claw out of my hand and pointing at them.

The Empire was all about taking over worlds. Vader started out slowly, telling me to bang my head against walls. It was compelling, so I did it. Every time I did it, I felt better, but less in control.

Things got worse, and I lost touch more and more with my world as Darth Vader took it away from me.

Of course, I was eventually saved. The plan involved a garbage compactor and some inept rescuers. I'll save that story for another time. 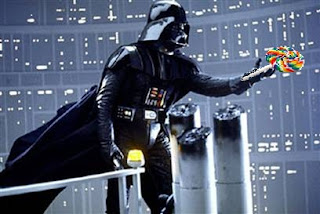 "Come to the Dark Side. I've got candy."

I love you, Mr. Stainton.