The Mood Disorders Association of BC describes mental illness like this:

Everyone has a jar with marbles. Some people are born with a lot of marbles, others with less (this is called "genetic predisposition").

Stress in our lives add marbles to the jar. When the jar overflows, you develop a mental illness. (Probably why so many soldiers develop mental illness in the form of PTSD after experiencing combat. That's a LOT of marbles).

Medication and counselling can help you lose your marbles. ;)

You can build a cap on your jar called "resiliency" by doing things to keep mentally fit like eating a proper diet, exercising, meditating and getting enough sleep; and not doing things that are risk factors like drinking, smoking pot (ironically, hard drugs don't seem to be a risk factor. Go figure), and not sleeping.

If you have lost your resiliency and your jar is overflowing with marbles, then you have a problem that needs treatment.

My jar recently became full, my reliency dissolved, and my bipolar disorder and anxiety flared up - badly. I am on medical leave right now as I work on losing my marbles. I started cycling rapidly between extreme hypomania and extreme depression (I have been going from bottom to top in one week, but thanks to treatment I have started to just be hypomanic - at least for the last few weeks). The hypomania can be pretty funny (and cause me to write lots of blog posts), the depression not so much (it's made me suicidal a couple of times in the last few months).

Here is a photo of what I was working on the other night while I was hypomanic and couldn't sleep, in spite of taking tranquillizers: 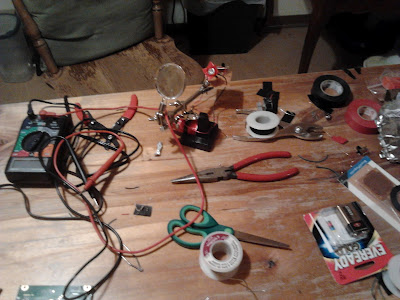 ﻿
It's a magnifying glass that you aim at the Eastern horizon. When the sun comes up it focuses light on the tiny rose you can see in the top middle, just above the table. The rose has a photo-sensitive diode in it, and is attached to a circuit that activates a vibrating motor from an old X-Box controller. The motor then gently rings two antique bells I inherited from my grandmother. It's a sunrise alarm.

I stayed up almost all night working on this. When I get hypomanic, I work on things until they are done. My son came home from his night shift. After talking with him (I talk a lot when I'm hypomanic) I realized that this was crazy, stopped the project, and got some sleep instead of finishing it. It will probably stay unfinished, now, because the process was interrupted - and that's a good thing!

Mania makes your brain work in overdrive, until it finally becomes clogged with ideas. Some of the ideas are great (like my home-made aquarium filter that I built out of coffee filters, cheesecloth and charcoal), and many are bizarre (like my idea to create a cat food with things in it that will make a litter box smell nice. I named it "poo-pourri"). It also causes me to post too much on my blog.

So here's hoping I lose my marbles soon, so I can return to the work and a "normal" life. I hope you all lose some marbles, too. :)
Posted by D'Arcy at 7:05 AM

So many marbles to lose! I can't wait to see & sit down for a many hours talk.