When Suicide Prevention Hung Up On Me

I firmly believe that very few people truly want to kill themselves. With mental illness, the urge to commit suicide builds through steps - first, there is a depression. The depression becomes significantly worse, and is followed by intrusive thoughts - images about death that come into your mind out of your control. Then for me it is like a switch goes off in my head, and I make a plan to end the pain. My plans are usually very dangerous - not like taking pills, where someone can find you and save you. The plans are usually for instantaneous death - like stepping in front of a bus. It's very scary, because inside I really, really want to live - but outside, I am determined to die (sort of like those jawbreakers with the sweet centre that take an hour to get to through the yucky, hard exterior).

Anyhow, I had been released from hospital and was at work when Darth Vader came back and started talking into my ear. I sat at my desk, trying to ignore him, but the Force was strong with him (damn you, Yoda, for not giving me better training! Lifting boxes with my mind? What the hell!) I told my boss that I wasn't feeling well, and left to walk to the bus.

It didn't take long for Darth to take me through the steps towards suicide. I recognized it early (it's part of what you learn in hospital), and took my new cell phone out to call the suicide prevention number I had been given.

"Suicide prevention, how can we help you today?"

(Now that I think about it, do they really need to ask that? Do they do something else, too, like deliver pizzas?)

"My name is D'Arcy. I think I'm going to kill myself."

"Um, this is actually a bad time for us. Are you feeling pretty bad, or just a little bit bad?"

"Pretty bad. I think I'm going to kill myself."

"Can I please talk to someone? To you? I really think I'm going to kill myself."

"Just hang in there. Call back in say, a half hour, and we'll be able to help you. Or go to your doctor, okay?"

My first thought was "Suicide prevention probably DID put Rodney Dangerfield on hold!"

I couldn't think of any other  numbers to call. My brain was too overwhelmed to think of  911, and Darth Vader was laughing too loudly. As I walked toward a bus stop and certain death, I called my sister-in-law - the first contact saved on my cell.

I am so grateful to so many people for the many kindnesses they have shown me. My poor sister-in-law was first shocked when I told her what was happening, but then calmly talked to me for the next half hour until I got to safety.

Sometimes the best suicide prevention comes from someone who loves you. Thanks, Rhonda, for saving my life. :) 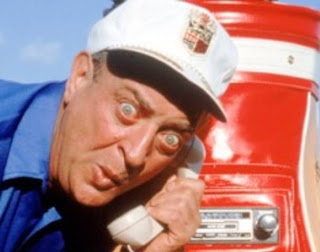 "Seriously? A lunch break? I gets no respect, I tells ya. No respect."

Mental note: Keep some suicide prevention numbers stored in your phone. You never know when you or someone else might need one.

If you live in British Columbia, there is the 24 hour Mental Health Distress Line: 310-6789 (no area code) Again, call it even if you only feel depressed - that's why it's called a "distress line."

If you live in Vancouver, here are two important numbers: