I am always hesitant to let people know what medication I am currently taking, especially in my neighbourhood where there are lots of alternative medical practitioners that many of my friends use. In my experience, these practioners and their patients are often at odds with Western medicine - especially the overuse of drugs and big pharmaceutical companies. I often agree with them.

Perhaps the drug that elicits the most dramatic response is lithium. There is a kind of irony to this, because out of almost every medication available today lithium is the most "natural." It is a metal that comes straight out of the ground.

What is lithium used for? Well, it's in the batteries that power your phone and laptop; it is a component of nuclear warheads; it's used in high quality pottery glazes; it's used in rocket fuel; it was an ingredient in the 1930's in the original 7-Up soft drink; and it has been used as a mood stabilizer for over 100 years, if not thousands (there are stories of ancient Greeks being prescribed water from alkali springs to treat mood swings. The springs are full of lithium).

What are some of the misconceptions? It is widely believed that lithium is dangerous; that it impairs kidney and thyroid functions; it becomes toxic; and that it makes you flat - you lose your creativity.

I was worried about all of these things when it was first suggested that I take lithium. The myths persist even among some doctors. Just before I found a family doctor (who is fabulous, by the way!) the doctor at the clinic I attended refused to prescribe it, in spite of the written directions from a psychiatrist at the Mood Disorders Association clinic. "Too dangerous," he clucked. "Easy for it to become toxic."

Well, when I got my family doctor and returned to the psychiatric clinic, it became clear that lithium was the drug that would best help me. The other mood stabilizer I had been trying just wasn't cutting it, and I was going downhill fast.

I've also been prescribed an atypical antipsychotic that has sped up the lithium (nomally you have to wait a month or two for it to become effective). I am still on the first mood stabilizer, and an anti-anxiety medication to help curb my stress. It's all working together nicely.

With lithium I can still run marathons. I just have to stay hydrated. It acts like salt in your body. At home I can tell when I need to drink more water, because I will get small tremors in my hands.

I go for blood tests every three months to check my lithium levels, to ensure that I am getting the correct amount. Unlike other psychiatric meds, it has a brief half-life. Stop taking it, and three days later your blood levels are almost zero.

Lithium gets a bum rap. If you are ever in a situation where you need a mood stabilizer, it is the gold standard. Don't let myths get in the way of your treatment. 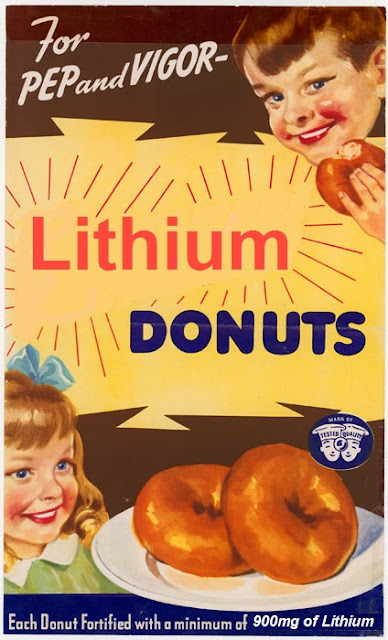